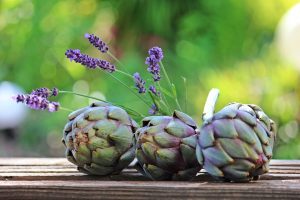 The awesome artichoke! So popular and can be easily prepared in a variety of ways. Tasty and good for you, the artichoke (known as the Globe artichoke) is loaded with healing properties that might truly surprise you. Stay tuned and read up on this amazing superfood!

Artichokes are packed with a number of essential antioxidants and “phytonutrients,” such as Quercetin, Rutin, Gallic Acid and Cynarin. Artichokes have a high ORAC score (oxygen radical absorption capacity), which tests the power of a plant to absorb and eliminate free radicals. They have a powerful ability to fight oxidative stress in the body.

One of the most crucial benefits of a food containing a high amount of antioxidants is its ability to ward off various types of cancer, since cancer cells can grow partially due to oxidation and “free radical” buildup within the body when they are left uncontrolled.

Antioxidants are exactly what our bodies require in order to combat free radicals and to slow the onset on diseases that are often seen in aging populations. Antioxidants present in artichokes include Rutin, Quercetin and Gallic Acid, and have been shown in studies to reduce the growth of cancerous cells, which can prevent cancerous tumors from growing or developing.

According to studies, artichokes have displayed their cancer-fighting capabilities on two particular cancers; breast cancer and hepatocellular carcinoma.

People with higher levels of cholesterol are more at risk for developing heart disease and experiencing cardiac arrest or stroke, but luckily the powerful substance “Cynarin” found in artichokes is one of the best natural remedies for bringing cholesterol back to a healthy level, as well as reducing coronary heart disease and metabolic disorders.

Artichokes are also fantastic for improving bile duct and gut flora health, reducing digestive issues and boosting immunity. Since much of the immune system is actually held within the gut, this is great news! Additionally, artichokes contain a powerful antioxidant flavonoid known as “Silymarin,” which is an effective liver protectant.

Studies have also shown that artichoke leaf extract can be very helpful in relieving symptoms associated with IBS (Irritable Bowel Syndrome), a condition that often causes painful symptoms such as constipation, diarrhea, bloating, an upset stomach, etc. Due to its high fiber content, ability to reduce inflammation, nourishing effects on the gut lining and the liver, artichokes are a great superfood! 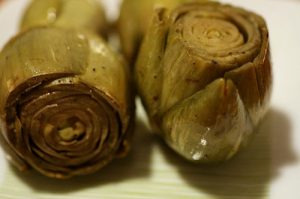 Due to their high fiber content, they are a great body cleanser and will “clean out the pipes” while offering top nutrition. They’re also low and fat and are great for reducing cholesterol. Artichokes are great because they make you feel full and content, while stabilizing your blood sugar levels.

The high amount of fiber found in artichokes has the ability to help keep blood sugar levels stable, avoiding spikes and dips in “Insulin, which can lead to serious problems for diabetics. The fiber in artichokes allows glucose to be absorbed in the blood more slowly, and because fiber is a substance that can be digested and does not require insulin, fiber does not count toward the amount of carbohydrates or glucose you consume.

Iron deficiency has become a bigger problem in recent times. Its most common among women (especially premenopausal women) and also in children. Low levels of iron can result in fatigue, a weakened immune system, poor concentration and ability to focus, as well as digestive disorders like leaky gut syndrome and irritable bowel disease.

When iron levels are low for an ongoing time, the condition Anemia may have set in. It occurs when the body cannot produce enough hemoglobin, so the red blood cells are not able to properly distribute oxygen throughout the body. Consuming iron-rich foods like artichokes is a great way to prevent or reduce anemia and iron deficiency.

Eat your artichokes to improve your skin health. Antioxidants in the form of vitamins and minerals can help prevent your skin from aging, becoming dry, and losing its texture and appearance. Collagen makes up about 70 percent of your skin cells, and the antioxidant Vitamin C is one of the biggest contributors to healthy collagen development. so, not eating enough foods that contain vitamins and antioxidants often results in low collagen production and other skin-related conditions, which can age the skin prematurely. 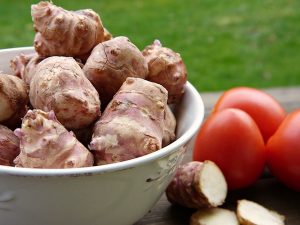 In juice form it is a true healing elixir! Rich in alkaline mineral elements, particularly potassium, it’s loaded with essential minerals and vitamins. Both globe artichoke and Jerusalem artichoke provide plenty of dietary fibers and contain only few calories. Globe artichoke is rich source of vitamins C, K and B9 and minerals such as sodium, phosphorus, manganese and magnesium. Jerusalem artichoke is excellent source of vitamins B1 and B3 and minerals such as iron, potassium, copper and phosphorus.

• Edible Part of the Plant:
Edible parts of globe artichoke are actually immature flower buds made of overlapping green-purple leaves covered with spines on the tips. Tender ends of the leaves and the base (the heart) of a flower bud are edible and quite yummy. The edible part of Jerusalem artichoke is a knobby looking “tuber,” which looks kind of like a ginger root.

• Consumption:
Globe artichoke can be juiced raw, steamed, boiled, or grilled. Thorny tips need to be removed before cooking. Globe artichoke is usually consumed as side dish or as an ingredient of various salads, soups and vegetable dishes. Jerusalem artichoke can be consumed raw, in the form of crispy, nutty and sweet snack, or it can be roasted, boiled, steamed or mashed. It is often combined with carrots, potatoes and pumpkins.

Did You Know?   Globe and Jerusalem artichokes are also used in the fermentation of alcohol and extracts!

In juice form, this vegetable contains the enzyme “Inulase,” which produces “Inulin.” Inulin is a substance resembling starch and is converted into something known as “Levulose.” Its juice is very beneficial for diabetes sufferers and can be consumed by itself or with other vegetables.

As with most any food, the artichoke holds its nutrition best in raw form, but many people enjoy creating a healing artichoke broth. Just cook it low and not too long, otherwise, it loses it’s healing power.

One medium artichoke cooked with no added salt has 3.47 grams protein, 64 calories and 10.3 grams of fiber.

So, be sure to eat your artichokes. You’ll be very glad you did!