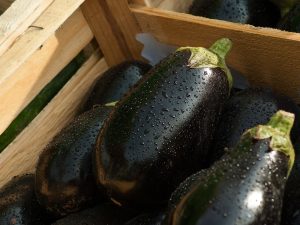 Eggplant is a vegetable with a lot to offer! It’s filled with a high amount of antioxidants and special phytonutrients, including phenolic compounds, flavonoids such as Nasunin, and numerous vitamins and minerals, as well. All of these eggplant nutrition benefits come at a low calorie count of only 35 calories per cup, thanks to eggplant’s high fiber and water content.

Eggplant, a member of the Nightshade vegetable and Solanaceae plant family, is considered to be a part of a group of valuable vegetables due to their Anthocyanin antioxidant compounds, which can be seen in eggplant’s rich purple colors.

Eggplant has been enjoyed around the world for thousands of years as part of healthy, traditional Middle Eastern and Mediterranean diet. Today it is commonly eaten in such places as France, Italy, Australia, Israel, Egypt, the U.S, and just about everywhere else on the planet!

Most people eat eggplant cooked, although consuming eggplant in raw (juiced) form provides even more benefits!  The good news is cooking eggplant actually brings the antioxidants and compounds out even more, enhancing the beneficial properties released within!

Eggplant is not the highest in many nutrients as some of the superfoods, but it’s unique and very good for you. Eggplant contains a somewhat rare and extremely beneficial type of antioxidant known as Nasunin. Nasunin is a type of Anthocyanin antioxidant found in all types of eggplant varieties, in addition to other deeply colored fruits and vegetables.

Additionally, Nasunin is one of the key contributors to the health benefits of eggplant nutrition, and like other antioxidants, it has the ability to fight free radical damage in the body which is often the cause of disease development and how our bodies age. Most of the nasunin present within eggplant is found in its purple skin, so consuming the entire vegetable, including its peel, is important to reap all of eggplant’s health benefits.

According to studies, nasunin is a potent fighter of inflammation and oxidative stress, acting as an “O2 scavenger,” and also an iron “chelator”, which can protect against lipid peroxidation.  It is used to help iron become absorbable by the body and also to bind molecules to poisonous metal agents such as mercury, arsenic, and lead which can then be carried out of the body, resulting in a detox.

Nasunin has been shown to protect DNA and cell membranes from oxidative stress and damage because of its positive effects on cell walls. Nasunin has the ability to protect the fat (or lipid) layer of the cell membrane that keeps its structure intact and prevents mutation or cell death.

Nasunin is also involved in the ability to help cells receive and use nutrients from food, and also to discard of waste. Without enough antioxidants like nasunin present within the body, toxins and waste build up and can lead to a host of diseases including cancer, heart disease, arthritis and more.

One cup of cooked eggplant provides (in daily recommended values according to the USDA):

It’s believed that there are amazingly 13 types of protective phenolic acids present at significant levels within eggplant. Different types of eggplants have varying levels of antioxidants and phytonutrients, but all share similar qualities in their ability to fight cancer.

Eggplant nutrition contains disease-fighting nasunin as previously mentioned, in addition to many other phytonutrients like chlorogenic acid. Cholorogenic acid is found in the cell walls of certain plants and known to be very beneficial in stopping free radicals from forming cancerous cells and leading to cancer tumor growth. In addition to its anti-mutagen and anti-tumor effects, cholorgenic acid is believed to act as an anti-microbial, anti-LDL (bad cholesterol), and also an anti-viral, meaning it protects against various levels of inflammation and disease formation.

Studies have shown that eggplant can be beneficial to heart health due to its ability to fight inflammation and oxidative stress, leading to healthier arteries and more balanced cholesterol levels.

Eggplant nutrition has been shown to be beneficial in maintaining healthy blood cholesterol levels because of its phytonutrients’ ability to improve circulation and reduce plaque buildup in the main arteries, including the aorta. While your body does need a certain amount of cholesterol, consuming eggplant is correlated with balancing the amount that is held within your blood vessel walls and improving blood flow. Studies have shown that eggplants containing potent cardio-protective compounds judging by their ability to increase left ventricular function (one of the main blood-pumping chambers of the heart) and to reduce apoptosis.

Eggplant is largely made up of water, which is why it is so low in calories. Consuming vegetables that have a high content of water, fiber, and nutrients helps to flush out waste and toxins from the digestive tract. The digestive tract and colon need to be well hydrated in order to push stool through the intestines and out of the body.

Eating plenty of fresh, whole foods in addition to drinking enough water is crucial for allowing the digestion system to expel toxins and excess water weight. Because of the known benefits of eggplant nutrition, eggplant is included in the GAPS diet for this reason, a diet especially helpful in correcting digestive disease, neurological issues, reducing inflammation and healing autoimmune conditions too.

Because of the fiber and water content that it has, eggplant is also useful in helping to achieve weight loss. Because it provides an array of vital phytonutrients, vitamins, and minerals yet is very low in calories, eggplant is a great addition to any low-calorie healthy diet. The fiber in eggplant helps to make you feel full so you are less likely to overeat.

Something you may not already know about eggplant nutrition is that one cup of eggplant provides roughly 5% of your daily needs of important manganese. Manganese is a mineral that is naturally occurring in the body in small amounts, so the rest must be obtained from a healthy diet. Manganese acts as an antioxidant, seeking out free radicals and eliminating them from causing bodily harm and oxidative stress.

Manganese contributes to the formation of a healthy bone structure because of its impact on bone mineralization and metabolism. It is needed in order to metabolize and use calcium properly and to create essential enzymes for the formation of strong bones.

Additionally, manganese assists in the metabolic activity within our body, formation of connective tissues, and the regulation of hormone levels which are crucial for reproductive health and fighting infertility. It also plays a part in regulating healthy thyroid gland function, fighting depression, and helps to control blood sugar level.

High in B Vitamins

Eggplant nutrition provides a good source of Vitamin B1 and Vitamin B6, two of the vitamins that are included in the healthy metabolism and energy-promoting B Vitamin Complex. B vitamins are water soluble, found in many vegetables and other whole food sources, and are needed to maintain healthy energy levels, brain function, metabolism, heart health, and focus.

They are also required by the body to absorb all of the nutrients from the foods you eat, working to convert fats and carbohydrates into useable “fuel” for the body the burn.

Vitamin B6 is needed to help create amino acids, which are the building blocks of proteins. Amino acids are used for numerous bodily functions and without enough of them, problems including a lack of energy, skin inflammation, anemia, depression, chronic fatigue, and nutrient-deficiencies can all occur.

Vitamin B6 is also involved in the formation of hemoglobin (which carries oxygen to the blood), neurotransmitters (which help control your mood), as well as regulation of blood glucose. Vitamin B1, another type found in eggplant, is used for maintain a healthy metabolism, blood and heart health, brain function, and more.

When an extract is taken from the skin of eggplant extract, a highly concentrated cream is made that studies have shown is able to help fight skin cancer. This type of cream contains a 10% concentration of solasodine rhamnosyl glycosides (BEC) which has been clinically proven as an effective treatment for several types of skin cancers: keratosis, basal cell carcinomas and squamous cell carcinomas.

It’s believed that eggplant has been used in this way for thousands of years and makes an effective natural remedy for malignant and benign skin cancers.

Wild eggplant varieties were first cultivated in parts of India and China around the time of 500 A.D. Eggplant were first mentioned in ancient Chinese texts dating around year 544. Eggplant was introduced throughout the Mediterranean in the early Middle Ages, and records show that during the medieval era, it was brought to Spain where it was given its name Aubergine.

Around the turn of the 16th century, eggplant spread throughout England and the rest of the Europe, where it is commonly still consumed today. It made its way over to the Americas with European explorers, although many people chose to stay away from eating eggplant for for many years because it was thought of as a poisonous plant due to its deep color.  It took years before the health benefits of eggplant nutrition became known and understood like they are today.

Today China, India, Iran, Egypt and Turkey are the leading growers of eggplant. China produces 58% of the world’s eggplant crops. Eggplant is a very diverse vegetable, appearing commonly in cuisines of many countries, including Thailand, France, Italy, Greece, Turkey, Syria, Israel, India, and others.

Eggplant is known by a few different names around the world, but is most commonly referred to as an aubergine in places including England, Australia and France.

How to Select Eggplant

Look for eggplants with a solid shape, free of any major dents or bruises. Many eggplants will appear brightly colored and glossy with shiny skin. Those are perfect to eat considering that’s where many of the nutrients of eggplant are stored.

If you find eggplant at a farmers market, most likely during the late summer months or in early fall, you will probably come across the numerous sizes and shapes that eggplants come in. Eggplant can be found in a range of colors including all shades of purple and lavender, jade green, orange, yellow-white, and purple-white striped.

Eggplant can be found in sizes that are as large as a football, or small than a potato. The kind most popular in most of North America is the deeply purple, large and oval type. TThese usually have a creamy, beige/white flesh and a spongy consistency that easily soaks up sauce, oil, and flavor.

How to Cook Eggplant

While the different varieties of eggplant will range somewhat in terms of their exact taste and texture, they are usually described as having a spongy, soft flesh and a pleasant but bitter taste. In many recipes, eggplant is used as a complementary ingredient that adds texture, volume, and balance to stronger tastes coming from other highly-flavored ingredients.

Eggplant is commonly used around the world to make a wide variety of dishes. The Middle East, Greece and Italy use eggplant quite heavily. It is commonly added to Asian stir-dried dishes or grilled on the BBQ in North America. There are countless culinary uses and dishes to be made from eggplant!

Eggplant is a fairly hearty vegetable, so cooking it doesn’t seem to diminish the vital nutrients. In fact, light cooking can actually enhance the nutrition, bringing the nutrients to the surface of the plant.

Yes, eggplant can actually be juiced or extracted! Using a juicer, you can cut the eggplant into cubes (with the skins) and juice them up. Keep in mind, the juice yield will not be huge, but filled with nutrition and great for you! Mix it with other vegetables to balance the flavor.

Eggplant is so delicious and good for you.  So be sure to read up on recipes and ideas for preparing some incredible eggplant dishes!