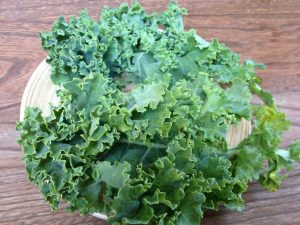 All hail the power of kale! Rich in vitamins A, C, E, and K along with other vital nutrients, the health benefits of kale bountiful. They include heart support, cancer prevention, detoxification and a myriad of others.

A member of the cruciferous vegetable category, kale is quickly becoming one of the most popular health foods today. In addition to its healthy contents, kale is also rather beautiful! Kale comes in, red, blue and purple varieties, which are just as edible and nutrition as the traditional dark green. Some come with a white interior and are very popular as meal garnishes.

Eating kale dates as far back as early Rome. History tells us that it was one of the most popular green leafy vegetables of the Middle Ages!

Kale comes from the Acephala group of the Brassica oleracea (oleracea var) species that includes collard greens. Because kale leaves don’t form a head (like iceberg lettuce), it’s considered to be more closely related to wild cabbage than most domesticated forms of vegetables.  It’s most commonly classified by leaf type:

These cruciferous vegetables are rich in Glucosinolates, and they all share the same benefits:

Here are just some of the health benefits:

Kale as a Natural Anti-Inflammatory

Rich in Omega-3 and Omega-6, kale is the perfect anti-inflammatory food. Great for reducing rheumatoid arthritis, Crohn’s disease and cancer.

Kale is particularly rich in vitamin C and beta-carotene (the precursor to vitamin A). This is important because antioxidants are known to counteract the damage caused by free radicals, which can lead to a variety of health problems.

Sadly our bodies are exposed to highly unstable free radical molecules every day through the polluted air we are forced to breathe. Coupled with toxins in the food and chemicals in our water supply, these add even more damage by causing “oxidative stress,” a process that triggers cell damage and has been linked to everything from cardiovascular disease to cancer to cataracts.

Oxidative stress is also known to be one of the main contributing factor to neurocognitive disorders, such as Parkinson’s disease and Alzheimer’s disease.

One of the top health benefits of kale is that it’s a natural detoxifier. It removes toxins, and helps eliminate them from your body. This is due to a component in kale called isothiocyanates (ITCs), which are made from glucosinolates and have been reported to help detox your body at the cellular level!

These ITCs are a powerful “one-two punch” against toxins and free radicals. Toxins in our environment, such as processed foods, pollutants, pesticides and pharmaceuticals, increase the toxic level of the body and increase the chance of disease. Additionally, kale is rich in sulphur, which also aids in toxin removal.

It’s important to note the health benefits of kale are most potent the sooner you can get it after harvesting, as glucosinolates are easily diminished under certain conditions. If your produces undergoes sterilization or radiation treatment, this can greatly weaken the nutrition. This is why it’s so critical to get your kale from a solid, responsible source, such as a local farmer or organic grocery store.

Due to its powerful antioxidants, anti-inflammatory properties and mega nutrition, kale is a perfect food for vibrant heart health. It even converts bad cholesterol to good cholesterol!

It starts in the womb! Kale is a valuable source of folate, so eating kale regularly (especially during pregnancy) can help prevent several birth defects can also promote proper birth weight for the child, formation of the child, and other healing effects. The reason is due to the high folate content. Consuming healthy, organic kale, particular raw, is better than any supplement you will buy in stores, and it can help improve Vitamin B12 deficiency, sex drive changes or issues, Lack of focus, insomnia or trouble sleeping, emotional imbalances, and more.

Like all of cancer-fighting cruciferous vegetables, kale has been shown to help stop cancer in its tracks! Because kale is rich in glucosinolates (a large group of sulfur-containing compounds) it helps shut various cancers down, including bladder, breast, colon, liver, lung and stomach cancers.

Did you know? These powerhouse chemicals are known to break down during the chewing and digestion process into biologically active compounds that prevent cancer cells growth, which are referred to as indoles, thiocyanates and isothiocyanates. So when you chew kale, it improves your health!

Another one of the amazing health benefits of kale is it can improve your eyesight! Two nutrients that give kale its dark green hue, lutein and zeaxanthin, have been shown to help prevent macular degeneration and cataracts.

Just one cup of chopped raw kale provides about:

The health benefits of kale also come from its omega-3, omega-6, carbinol and kaempferol content.

A rich source of several vitamins and minerals, the vitamin K content in one cup of cooked kale stands out considerably among the rest of the nutrients. Playing a key role in blood clotting and excessive bleeding prevention, some experts are now looking to vitamin K as a natural way to treat osteoporosis!

Ways to Eat and Consume Kale

It is easy to enjoy the health benefits of kale since it’s in so many great recipes these days.

• You can make it steamed for a few minutes (do not overcook or you will kill the nutrition!)
• Lightly sautéed with fresh garlic cloves and some onions. Add some coconut oil or base for flavor. Yum!
• You can make kale chips, which are awesome when done right!
• Throw it in your favorite salads.
• You can also make awesome kale smoothies or juice, add it to soups, or add it to any meal as a side dish or garnish.
• Many of us here at the Raw Food Guru like it plain and raw! We’ll just put it out on a table as a snack.

Very Important Kale Precaution: Where you Buy Your Kale Matters

The health benefits of kale greatly depend on the source you buy it from. Whenever you shop for kale, make sure to get organic kale, as it’s one of the most heavily pesticide-sprayed crops.

Did you know? Two-thirds of produce sampled in recent evaluations were poisoned with pesticides. Non-organic kale ranks among the world’s most heavily polluted crops. Where and what you buy really does matter.

So, the bottom line is always try to buy from a good source. Also make sure to wash your produce thoroughly before eating it. If in doubt, cook it, as pesticides are greatly reduced when cooking.