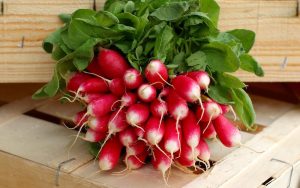 One of the most underrated foods has to be the radish! Radishes are often an overlooked ingredient in things like salad or side dishes. Even main entrees don’t feature the radish in a great light! Well, it’s high time for the radish to get its due because radish nutrition offers a boatload of health benefits!

The radish is known as a classic adornment for the leafy green salad, offering a crunchy, peppery punch, but has actually been around for a very long time. Most states grow radishes, with Florida and California topping the growth charts.

The name origin of the radish is from the Latin word radix, and its genus name is Raphanus coming from of an ancient Greek expression raphanos, meaning “easily reared.” The radish is usually seen pickled in brine, much like you see pickled cucumbers, in places like China and Japan, with nearly one third of the weight of vegetables grown in Japan being the daikon radish. When pickled or fermented, the radish gains a beautiful yellow color that actually seems unattractive to many in the U.S. but is delicious and nutrition-packed. Regardless, it’s part of the core diet in Japan, adding a zip to the commonly consumed bowls of rice. 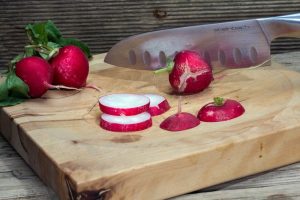 The radish is grown for many reasons, such as cooking and for the oil contained within its seeds. India grows the rat-tailed radish variety for the fleshy seed pods, while Egypt desires the tops for greens. Radishes can be as small as a grape tomato or as big as a basketball, and the long varieties can get up to two feet long!

You’re probably familiar with the white, red, or red and white radish. Some grow the round black Spanish or long black Spanish varieties, which contain a black skin and have a bright white flesh that’s firm and crisp. There are also the rose-colored China rose and shite Strasburg, which are a part of what’s known as winter radishes and are usually stored similar to beets and turnips.

The radish is believed to have originated in China due to the wild varieties that have been found there, with Middle Asia noted as developing many forms after the introduction from China in prehistoric times.

Records show that radishes were very common in Ancient Egypt, even before the pyramids were built. Replicas of the radish were created in gold with beets in silver and turnips presented in lead. Ancient Greeks have written much about radishes as well as the Romans.

Larger varieties were mostly noted in northern Europe and England with a report in 1544 by a German botanist of a radish weighing in at 100 pounds! The radish became popular in Mexico around the 1500s, Haiti in 1565 and England in 1586, possibly making them one of the first European crops brought over by Columbus.

The radish is an alkaline-forming food , which is very helpful in keeping pH balance in check. Radishes are members of the Brassicaceae family, which also includes mustard and cabbage. The root of the radish is related to kale, broccoli, cauliflower and horseradish, to name a few.

Radishes have been known to repel heart disease. Much like red cabbage, radish nutrition contains a type of flavonoid called Anthocyanins, the same flavonoid you find in blueberries.  According to a recent study, these anthocyanins possess anti-inflammatory properties that can help reduce the risk of cardiovascular disease and its effects such as peripheral artery disease, heart failure and even kidney disease. The anthocyanins are able to circulate metabolites, which are the “products of metabolic reactions catalyzed by various enzymes” naturally occurring within cells. This process could be what provides protection against many heart issues, targeting the vascular system, by reducing oxidative stress and reducing inflammation.

Vitamin C is essential to making collagen, which is part of what makes up the much-needed cartilage in our bodies. When we think of vitamin C, we often have a vision of oranges and orange juice, but did you know that radishes are actually some of the top vitamin C foods? Radishes provide 17.2 milligrams per serving, which is about 29 percent of your daily requirement.

Vitamin C is an antioxidant that can help limit damage to cartilage that may be caused by free radicals found in the body. Ultimately, this can help anyone who has been diagnosed with arthritis as well as prevent it in the first place.

Radishes are typically small but pack a good bit of fiber, offering a fulfilling addition to your plate. As a high-fiber food, radishes can help regulate bowel movements, eliminate constipation, which is a cause of hemorrhoids, and may help lower cholesterol by binding to low-density lipoproteins.

Because fiber does not digest easily, eating fiber-rich foods can help you feel full, helping you achieve satiety and avoid overeating. Most adults don’t get enough fiber in their diets. On top if that, the radish is very low in calories and contains a lot of water, which makes them a great option for most any meal and useful for anyone trying to lose weight.

The radish contains many nutrients, such as B vitamins, zinc, phosphorus and vitamin C, which can help the skin heal. Additionally, radish nutrition contains water, as I noted above, providing much-needed hydration for the skin. Part of what makes the radish a good choice for the skin is the antibacterial properties that help heal dry, cracked skin and prevent infection.

The radish is a great natural remedy for jaundice. While it’s usually thought of as only occurring in infants, jaundice can actually occur in adults, as well. Radishes are fabulous for this. The radish fits in due to its detoxification properties helping to cleanse the blood of toxins and waste. If you notice a yellowish discoloration of the skin, mucous membranes and white of the eyes, check with your doctor or health care professional for an evaluation. 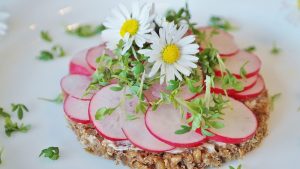 Most people eat radishes raw in salads or side dishes, but pickling is a fantastic way to preserve food, while creating a delicious yet nutritional food the process. For those who don’t enjoy the peppery zip of raw radishes, pickling may be the way to go. Additionally, you can add all sorts of herbs and spices, such as mustard, garlic, dill, turmeric and other ingredients into the mix. There are countless recipes online for pickling preparation.

To store radishes, cut off the greens and store in a plastic bag in the refrigerator. Scrub radishes just before you plan to eat them. You may peel or leave the skin intact.  Small radishes can be served whole or chopped; while black and daikons are usually cut or grated. Radishes are most commonly used in a green salad or added to plates for garnishes. Grate red radishes into pasta or bean salads for a slightly different taste and texture. Red radishes are great for adding color to a veggie tray.

Radishes are very safe to eat for most people, but some people are sensitive, Eating large amounts of radish could irritate the digestive tract, so eat it in moderation. Radishes may irritate people who suffer from gallstones, so in that case, it may be best to avoid them. Minimal risk in consuming radishes during pregnancy or breast-feeding, but check with your health care specialist for assistance.

Now that you’ve learned more about the benefits of radishes, be sure to add some to your diet very soon!