GMO vs. Non GMO Organic - What Does It All Mean? - Raw Food Guru

GMO vs. Non GMO Organic – What Does It All Mean? 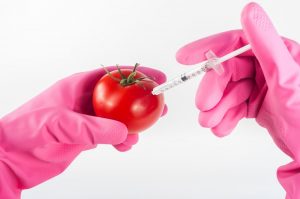 GMO vs Non-GMO: The Good, The Bad & The Ugly

Today, this issue is one of the most controversial problems we face on a global level. More and more people in the United States are worried about our food supply and what the future holds for all of us.  Stopping GMO foods in this country is becoming an upward battle against the big Wall Street conglomerates doing their best to control what we eat, while feeding us garbage foods in the process.  The effects of what the U.S. has put into motion has long term, long reaching ramifications that are affecting the entire planet, including our oceans and the air we breathe. It will take all of us to demand real food and fight back against the big business machinery.  In the meantime, here are some facts to help you understand what is going on and how you can protect you and your family against what is currently happening across America:

What Exactly is a GMO?

GMO stands for Genetically Modified Organism.  A GMO is a plant, animal, microorganism or other organism whose genetic makeup has been modified using recombinant DNA methods (also known as “gene splicing”), gene modification or transgenic technology. All of these “newer” science creates unstable combinations of plant, animal, bacterial and viral genes that do not occur in nature or through traditional crossbreeding methods. (Visit the What is GMO page for more information. Also view High-Risk Crops.)

We are asked this question constantly. No, they are not safe for you.  Most developed nations do not consider GMOs to be safe and have significant restrictions or outright bans on the production and sale of GMOs. Sadly, the U.S. and Canadian governments have approved GMOs based on studies conducted by the same big business companies that created them and profit from their sale.

Sixty-four countries around the world, including Australia, Japan, and all of the countries in the European Union, require genetically modified foods to be labelled.  Against the wishes of the people, GMOs are not required to be labelled in the U.S. and Canada.  As a result of this unfortunate fact, the organization known as the Non-GMO Project was created to give consumers the informed choice they deserve.

Most packaged foods contain ingredients derived from corn, soy, canola, and sugar beet, and the vast majority of those crops grown in North America are genetically modified

What GMO is Doing to Farmers

What is happening to farmers is unspeakable. Through ill-gotten means, biotech companies have obtained patents with which to restrict their use. As a result, the companies that make GMOs now have the power to sue farmers whose fields are contaminated with GMOs, even when it is the result of “inevitable drift” from neighboring fields. As a result, GMOs therefore pose a serious threat to farmer sovereignty and to the national food security of any country where they are grown, especially in the United States and Canada.

GMO Impact on the Environment

More than 80% of all GMOs grown worldwide are engineered for “herbicide tolerance.”  As a result, use of toxic herbicides like Roundup has increased 16 times since GMOs were introduced.  GM crops are also responsible for the emergence of herbicide resistant “super weeds” and “super bugs,” which can only be killed with more toxic poisons like something known as “2,4-D” (a major ingredient in Agent Orange). GMOs are a direct extension of chemical agriculture and are developed and sold by the world’s biggest chemical companies (like Monsanto). The long-term impacts of GMOs have not been publicly revealed and/or are unknown at present, but they certainly can’t be good. Once released into the environment, these GMO organisms cannot be recalled.

If you would like more information about the serious effects of GMO please Click here for The Non-GMO Project.

The “textbook” definition is this: Organic produce are grown without the use of pesticides, synthetic fertilizers, sewage sludge, genetically modified organisms, or ionizing radiation. Animals that produce meat, poultry, eggs, and dairy products do not take antibiotics or growth hormones.  The sad truth is there are still many problems happening with organic food behind the scenes. What they don’t want you to know is pesticides and synthetic fertilizers may still be involved. Unless you directly know the source of where the food is coming from, many secret ingredients may still be going into to what you think is truly organic, clean food. The business of food has become very corrupt and dirty in every since of the word. Farmers are struggling to meet guidelines, while certifying agencies like the USDA and Certified Organic are charging farmers a lot of money to “buy” their certificate.  It’s a big problem. We discuss more about these issues throughout this website.

Did You Know? There is a popular list known as “The Dirty Dozen & The Clean Fifteen,” referring to the chemically cleanest and dirtiest foods on the market.  Make sure to visit our list. It will blow your mind!

What is the Difference Between between “Organic” vs. “Locally Grown?

An excellent question.  Locally grown food is usually grown by smaller farms in your area, and most of them do their best to run a good operation. Most of them take pride in trying to grow their crops as organic in nature, but often times they are victims of something known as “drift,” meaning nearby farms who do use pesticides blow into their airspace. It’s still a pretty safe bet going local. Certainly better than buying GMO.  Whenever you by corn, be sure it is organic. The GMO corn is terrible for you!

Are All Non-Organic Foods Bad For You?

We are asked this question often. While of course organic is usually better, certain foods you can get away with buying non-organic if necessary. Foods with thick skins such as certain melons, avocados, most citrus, kiwi fruit, and eggplants are fairly insulated. Foods such as cauliflower. mushrooms and cabbage are fairly resistant to pesticides and if well washed can be relatively safe. Buying organic is preferable, but for some people it just isn’t an option. Do the best you can with what you have to work with.  Whenever buying non-organic carrots, be sure to peel the skins off and wash thoroughly with your choice of vegetable cleaner before eating or cooking.

How Do I Know if My Food is GMO?

Sadly, we have a very unfortunate answer for you…  Because food is run by big business, they don’t want you to know the truth about what is happening behind the scenes, so they withhold and even hide the information from you.  For the most part, foods that carry the United States Department of Agriculture (USDA) 100% organic seal usually don’t contain GMO ingredients, but here is what is so disturbing… the agency does not necessarily test products to verify this, which is why so many people (like us at Raw Food Guru) are up in arms over this issue. The Non-GMO Project Verified seal is more reliable because this organization VERIFIES the products don’t have more than 0.9 percent genetically modified ingredients. In 2014, Consumer Reports tested different foods for the presence of GMOs. We found that no food with the USDA organic or the GMO Project Verified Seal contained more than 0.9 percent GMOs.

The best bet is to buy food that is labeled Organic and/or Non-GMO. Be sure to ask your grocer or produce professional assistance. They are MORE than happy to assist you.  Many of them are very experienced in food labeling and buying.