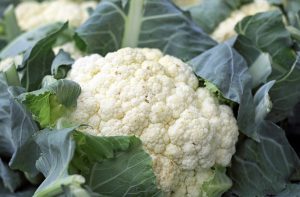 Cauliflower is often considered one of the healthiest foods on earth, and there is good reason why!  With its rich supply of health-promoting phytochemicals, high level of anti-inflammatory compounds, and ability to ward off cancer, heart disease, brain disease, and even weight gain- it seems there isn’t much cauliflower can’t do.

Cauliflower is a member of the cruciferous vegetable (or Brassicaceae) family- along with broccoli, cabbage, kale, brussel sprouts and some other less common varieties.

Recent studies suggest that cruciferous vegetables are an excellent source of natural antioxidants due to their high levels of various phytochemicals, as well as good suppliers of essential vitamins, carotenoids, fiber, soluble sugars, minerals, and phenolic compounds. In fact, it’s believed that brassica vegetables are the largest source of phenolic compounds in the human diet.

Cauliflower in particular is believed to be so beneficial due to its special combination of phytochemicals called carotenoids, tocopherols, and ascorbic acid- all forms of antioxidants currently being extensively researched in order to understand more about how they keep the body healthy.

Due to recent search, Brassica crops like cauliflower are now highly correlated with preventing chronic diseases including cardiovascular diseases, diabetes, neurodegenerative disorders, and various forms of cancers, just to name a few.

keep in mind these values are for only one cup of cauliflower. Due to the large volume- but low calorie count- of cauliflower, it’s very easy to eat 2 cups or more of cooked cauliflower at one time, especially when you use it mashed or chopped creatively in different recipes. This means you can get 2-3x the health benefits of cauliflower listed above with no problem.
Top 8 Health Benefits of Cauliflower

Fight Cancer – Reduces Cancer Risk
Numerous studies have shown that there is a strong tie between someone’s diet and their risk for developing cancer. Studies demonstrate that cauliflower is especially useful for preventing breast cancer in addition to colon, liver, lung, and stomach cancers. (2)

Cauliflower has been shown to have chemo-preventive agents that stall early phases of cancer development to help shut off tumor growth.

Studies have demonstrated that cruciferous vegetables like cauliflower can effectively inhibit the development of chemically induced carcinogenesis, acting as an anti-mutagen that halts tumor cells from further reproducing.

Numerous studies report that consuming cruciferous vegetables like cauliflower leads to the prevention of cancer growth in rats and mice during controlled studies, and that the same benefits apply to humans.

These protective chemicals are known to break down during the chewing and digestion process into biologically active compounds that help to prevent cancer cells from growing. Glucosinolates essentially act like natural pesticides in plant cells; when they are consumed by humans, they are utilized for DNA repair and help prevent cancer by slowing the growth of mutated cancer cells.

This makes cauliflower an excellent way to prevent cancer and also to decrease the chance of re-occurrences taking place. (3)

Fights Inflammation
Inflammation is at the heart of nearly all chronic diseases that we are faced with so commonly today. Cauliflower is rich in antioxidants and anti-inflammatory compounds which lower oxidative stress and the presence of free-radicals in our body.

The important range of antioxidants found in cauliflower- including the vitamins listed above but also beta-carotene, beta-cryptoxanthin, caffeic acid, cinnamic acid, ferulic acid, quercetin, rutin, and kaempferol- help to reduce oxidative stress in the body, which when left unregulated can lead to cancer and various other conditions.

Just a one-cup serving of cauliflower contains at least 73% or more of the recommended daily value of vitamin C, helping to reduce inflammation, boost immunity and keep the body free of harmful bacteria, infections, and common colds.

These serious conditions can lead to further inflammation, allergies and autoimmune responses, and even possible cardiac arrest. Cauliflower’s powerful nutrients help to stop the immune system from operating on overdrive, creating auto-immune reactions that can lead to oxidative stress capable of damaging brain cells. (4)

Provides High Levels of Vitamins and Minerals (especially important Vitamin C and Vitamin K)
In addition to Vitamin C and other antioxidants, cauliflower is also a good source of Vitamin K. Vitamin K is a fat soluble vitamin, meaning it is absorbed in the intestines along with fat, so this is one reason why eating cauliflower along with a source of healthy fat (like coconut oil for example) is important.

Vitamin K is responsible for keeping the skeletal structure healthy and helps to prevent conditions related to loss in bone mineral density like osteoporosis. Additionally it helps with blood clotting as well as bone calcification. But perhaps even more importantly, Vitamin K has been shown to have direct positive impacts on turning off inflammation in the body.

It’s believed that a poor diet- much like the standard American diet that many people eat today- is one of the fey factors playing into a Vitamin K deficiency that so many people experience.

Other reasons for Vitamin K deficiency include long-term use of antibiotics, digestive and intestinal problems such as chronic inflammatory bowel disease, and popular cholesterol lowering pharmaceutical drugs. Luckily cauliflower is able to provide a high dose of the much needed essential Vitamin which can help offset problems associated with a poor diet and unhealthy lifestyle habits.

Digestive system – Improves Digestion and Detoxification
Certain compounds found in cauliflower- sulforaphane, glucobrassicin, glucoraphanin, and gluconasturtiian- are very useful for helping the body to detox due to how they support liver function.

Cruciferous vegetables are beneficial for digestion and detoxification because of their rich supply of sulfur containing compounds called glucosinolates, which support proper nutrient absorption and toxin and waste removal.

Glucosinolates stimulate what are known as Phase II enzymes, the body’s natural antioxidant system; there they help to trigger the liver to produce detoxifying enzymes that block free-radical damage.

Glucosinolate can also help protect the vulnerable lining of the stomach, reducing the chances of developing leaky gut syndrome or other digestive disorders. At the same time sulforaphane facilitates detox and digestion by preventing bacterial overgrowth from occurring in the gut microflora, keeping bad bacteria from overwhelming the digestive system and allowing good bacteria to thrive.

Aids in Weight Loss
Cauliflower is extremely low in calories (only 29 calories per cup), has virtually zero grams of fat, very low levels of carbs and sugar, and yet is high in volume and filling fiber. This makes it an excellent choice for those looking to lose weight, since you can consume large amounts of cauliflower and fill up, without over-consuming calories, fat, sugar, or carbs.

Cauliflower also helps to reduce constipation and to keep excess waste or water weight moving out of your body, which helps you to feel immediately better.

Helps Balance Hormones
Consuming a diet rich in whole foods and antioxidant-filled vegetables like cauliflower has been shown to help balance hormones partially by reducing unhealthy levels of estrogen. High estrogen foods can be harmful to health when they begin destroying the vulnerable hormonal balance that many people struggle to maintain.

A poor diet and unhealthy lifestyle makes hormonal imbalances very common; processed foods like soy, meat, dairy, yeast, and refined can all lead to an unhealthy level of estrogen in the body. Too much estrogen in the blood stream is associated with health issues like hypothyroidism, autoimmune disease, chronic fatigue, and ovarian cancer.

Preserves Eye Health
The sulforaphane found in cauliflower has been shown to protect the vulnerable tissues of the retinal area from oxidative stress that can result in blindness, cataracts, macular degeneration, and more.

Cauliflower first appeared in the Asia region many years ago as a variant on a type of cabbage plant that is no longer thought to be consumed. It first became popular as an edible crop in the Mediterranean region, therefore we see cauliflower used still today in many Italian, Spanish, Turkish, and French cuisines.

It’s thought that these populations have been cooking with cauliflower since around 600 B.C. Cauliflower became more popular around Europe and then in the United States during the mid-16th century. At this time it became a commonly harvested vegetable that made its way into many different dishes.

Today the vegetable is used in nearly every type of cuisine in the world: Chinese and Japanese dishes, Italian, French, Indian, American, and so on. Most people choose to only cook and consume the white “head” of cauliflower, since the tougher stem and leaves can cause digestive upset for some people and tend to be tougher in texture.

Researchers have looked at the various ways to prepare and cook cauliflower in order to understand which cooking methods preserve cauliflower’s health benefits best.

According to studies, water boiling and water blanching processes had the biggest impact on reducing cauliflower’s nutrients. These methods caused significant losses of dry matter, protein, and mineral and phytochemical contents (roughly a 20–30% loss of certain nutrients after five minutes of boiling, 40–50% after ten minutes, and 75% after thirty minutes) (5).

Instead, surprisingly cauliflower kept its nutrients most intact when microwaved or gently stir fried. These cooking methods maintained the methanolic extract of fresh cauliflower and significantly preserved the highest antioxidant activity.

The very best method for cooking cauliflower seems to be gently sautéing it on the stove top, with a bit of water, broth, lemon juice, or a healthy source of fat which can make its nutrients more absorbable. Of course eating it raw, perhaps dipped in some healthy hummus or another type of dip, also preserves its nutrients.

When it comes to purchasing cauliflower, look for cauliflower that is tightly packed with its pieces pressed firmly together and not splaying open. While most cauliflower is found in white verities, other types like purple, yellow, and green cauliflowers can be found in certain parts of the world and are just as nutritious.

In fact, it’s believed that there are over 80 different types of edible cauliflowers for sale around the world! There are four major groups of cauliflower that these varieties fall into: Italian (includes white, Romanesco, various brown, green, purple, and yellow), Northern European (which are harvested in Europe and the US in summer and fall), Northwest European (harvested in winter and early spring), and Asian (grown in China and India).

No matter the color or type you choose, look for a uniform texture and color across the whole head of cauliflower and no major bruises or color spots. It’s best to use cauliflower within three to seven days after purchasing if possible, in order to ensure its nutrients are all still intact.

Luckily cauliflower is one of the most versatile vegetables there is, therefore adding more of it to your diet doesn’t have to be a chore. There are countless cauliflower recipes out there that are fantastic!

Possible Interactions and Concerns with Cauliflower

Thyroid function
According to the research, it takes large amount of cruciferous vegetables to cause hypothyroidism and it appears that this risk only exists for those who already have an iodine deficiency.

Digestive discomfort, including gas
Some people have a difficult time digesting raw cruciferous vegetables including cabbage, broccoli, and cauliflower. Cooking these vegetables usually helps relieve the problem. The problem is thought to occur due to the carbohydrates found in these vegetables (which all vegetables actually contain to some degree) that do not get broken down entirely in the digestive tract, combined with the high amount of fiber and sulfur.

Those with existing kidney stones or gout
Cruciferous vegetables contain compounds called purines, which can sometimes break down to form uric acid in the urine. If you have a preexisting condition like kidney stones and gout that you will want to speak with your doctor before consuming large amounts of cauliflower, although in small doses the risk if not thought to be anything to worry about.

So eat your cauliflower and enjoy vibrant health!